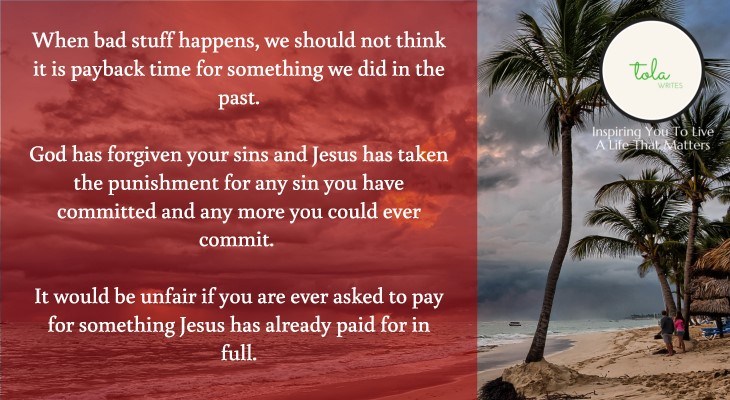 According to the lady involved, she had taken a commercial bike (Okada is the Nigerian code word for that) to ensure she met up with the timing for the next bus she was meant to be on

The bike-man instead of dropping her at her bus stop took her to the bus stop after that. As you can imagine, she was not in the best mood as she alighted, seeing that she had missed her preferred connection

Her sour mood lasted only for a short while once she found out that the vehicle she was meant to get on was involved in an accident in which lives were lost.

I can’t say I completely understand why some things happen but the truth is that God does all things in this world. I know that some of you were taught in Sunday School that God does not do some things but He just allows them to happen.

There has to be something wrong with the picture of a God that occasionally loses full control of His creation. We put it like this – God really didn’t want to do it but He had to allow it.

It’s not really our fault. Most of us have grown up with stories about the unending battle between good and evil with evil having occasional victories on the way to good’s eventual forever lasting victory.

There has to be something wrong with the picture of a God that occasionally loses full control of His creation. We put it like this – God really didn’t want to do it but He had to allow it.

God vs The Devil, Really?

There is really nothing wrong with this and honestly, I prefer to live the world with a positive outlook on good eventually winning.

It’s just that we have substituted good with God in the story of our lives. That is why most of us think that God is at war with the devil.

God is not at war with the devil. The reason is simple – the created cannot defeat its creator. It is a clear mismatch for the beginning.

So, why does bad stuff happen?

Who Let The Dog Out?

Bad stuff is part of this world;

You see ever since Adam and Eve dug their teeth into that fruit, so many things in creation have been out of whack. (Rom 8:22).

Bad stuff is part of payback;

This is where the talk about sowing and reaping comes in. Grow to be as big & bad as you can be and payback will come knocking at the door. (Proverbs 22:8a)

This is usually one of the hardest for most people to accept. But God can use bad things to either discipline His kids to mature them or punish the naughty neighbor’s kids to get their attention. (Hebrews 12:6, Proverbs 11:21).

God is not at war with the devil. The reason is simple – the created cannot defeat its creator. It is a clear mismatch for the beginning.

So, what does all this mean for those of us who have become children of God? It means when bad stuff happens, we should not think it is payback time for something we did in the past.

God has forgiven your sins and Jesus has taken the punishment for any sin you have committed and any more you could ever commit. It would be unfair if you are ever asked to pay for something Jesus has already paid for in full.

There is no payback for us as children of God – our big brother paid it all for us.

This leaves us with two alternatives – nature or discipline. The problem is that we may never completely know on this side of heaven which of the two it could be. So, what do we do?

There is no payback for us as children of God – our big brother paid it all for us.

Mercy because – an act of nature is part of God’s creation and He can still decide to do a miracle by changing the natural cause of nature. Mercy because – discipline means there is something that you need to take out of your life that He wants working out

In simple lingo – a clear understanding of what you should do at the moment.

I made this last because by this point you should have gained some perspective on how you should act in this situation. The perspective you have will help you live better knowing that you are under a friendly heaven

You probably wonder what all this stuff had to do with the story I started this piece with. Well, despite our best efforts, bad things like a car accident or a frustrating bike man happens.

There is no reason to conclude that God loves the lady more than the other passengers involved in the accident. This is probably the part of life that we may never fully understand on this side of heaven

Jesus even makes this point when a couple of people tried to talk to him about the Galileans that Pilate mixed their blood with their sacrifice. (Luk 18:1-5)

Bad things happen and we may never get the full picture. But in everything, God is still in control

A God In Control Of His World

Bad things happen and we may never get the full picture.

But in everything, God is still in control

And He will work everything for His purpose. Which works out for your good because you are His child. (Romans 8:28)

We live under a friendly heaven