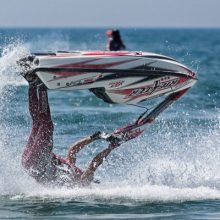 There is a story in the Bible from the book of Jeremiah.
For the uninitiated, Jeremiah is the guy who shares mostly bad news to the people of Israel.
The summary of this prophet’s inside scope from God was this “You guys have been big, bad, and naughty, God is going to give you an ass-whooping by sending everyone into Babylonian captivity”
Well, in the middle of it all, God tells Jeremiah to buy a piece of land.
Good old J-man pays seventeen shekels of silver for the land.
I’ll skip back in time to share another story.
Kings Ahab of Israel & Jehoshaphat of Judah were preparing for a land-based assault strike on Aram.
They decided to call in Ahab’s 400 prophets to know if they would have a winning outcome.
All of them agree – Ahab & Jehoshaphat would win.
One of the prophets, Zedekiah, even adds some special effects to the whole prophecy gig. He grabs some iron horns and hollers “this is the winning kit. you win with these.”
Everything was peachy until Micaiah shows up.

And I am giving out an ebook for free.

As an extra, I’m throwing in the audiobook too.

We have only one guarantee when we get married.

We will have to fight for our marriage to succeed.

We keep fighting for it everyday.

There are no off-days.

I sent a message to my wife yesterday.

“Thank you for fighting for our marriage with me.”

Maybe it was the emotions I was going through.

Earlier in the week, I was on the phone with a friend whose marriage was fighting against the currents pushing it to the rocks.

He’s not the only one.

Over the past months, similar stories from friends, acquaintances, & fellow Christians.