During my undergraduate, there was this guy who had been in the leadership of the fellowship I was a part of.

I came to school after he had quit while he was still completing his final year. One of the guys he had served with on the leadership team said the guy decided to walk out of his faith. Simply put, he had backslidden.

I was thinking about this recently and wondered.

Does anyone still backslide now?

Why Talk About Backsliding?

You are probably wondering why this popped up in my head? Aren’t there nicer things to think about? Stuff like world peace, poverty, hunger and the like.

Well, I can’t really make an excuse for myself. I just figured if this is something that has happened to someone in the past, it probably is (or maybe happening to someone now

Funny thing is that it may be happening to someone and they may not even know.

Does it just happen?

Or is it just a case of taking a slide on the dark side and you are there?

Sometimes, the best way to understand how you end up outside is to start with how you got in.

From there, we can learn about how you stay inside before you understand how you get out.

How Did We Get In?

1.Agree that you can’t meet God’s terms on your own:

This can be in any way. But it all boils down to you agreeing that you are not living a part or all of your life the way God wants it to be lived.

This is not about missing out of some material benefits or opportunities in life. No matter what you have or lack, not meeting God’s terms means you are not living a life that believes in Jesus (John 12:9).

To believe in Jesus is not to just agree with things said or written about Him. That is just a mental agreement.

Let the record show – you don’t plan to do it your way.

This is what is referred to as repentance – it’s a simple word which means you don’t want to continue doing what you used to before.

Someone once said that most people come to Christ not knowing they needed to change, so they never bothered to change. Jesus is just a new bonus they add to the everyday roller-coaster ride they are already on.

Okay, it means you have to change. It starts with you putting a stop to how you are living your life now

3.Agree to take Jesus from God so you can meet His terms:

If the whole aim of life is to live to make God happy, then you need to know about the only life that completely made God happy.

One of the reasons Jesus was sent by God was so He could represent the life that makes God completely happy without any minuses – only pluses.

Now that you have all these agreements in place, you need to say it. This is where prayer comes in.

How We Stay In

No matter what performance experts may say, making a decision is not the only thing. The next most important thing is living out that decision.

And this is where the rubber hits the road.

You need to live life on God’s terms and not your terms. This is what really shows that you have made a decision for God.

This is really where we get the who we are and what we do mixed up.

By virtue of our earlier agreements which we have spoken out in prayer to God, we have been accepted by God. We are now Christians.

We are no longer trying to be friendly with God – we are now friends of God. Because we are friends with God, we now live our lives to be like Jesus the only person who made God completely happy. 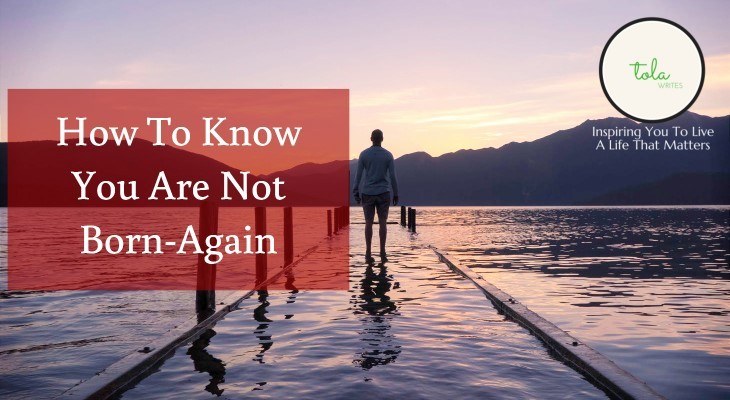 There is a term used to describe what it means for us not to meet God’s terms. In Bible language, it is referred to as sin.

Yes, I said it. In case, you are one of those guys who doesn’t like hearing the word – you may like to use nicer words like mistakes or failings.

Ok, as long as you come to the conclusion that it serves only one end – it makes us utterly incapable of living the glorious lives God wills for us. Rom 3:23

A Problem Solved Before You Knew

The problem of sin has already been dealt with before you become a Christian.

Your old sins and any other sin you could ever commit had been wiped out from the moment you accepted the sacrifice of Christ.

So, why are you now trying to live like Jesus? It is so that God can see you live out the example of the only life that made Him completely happy.

It makes Him happy to see you live it out and attracts more people to come closer to Him.

The Goal Of Christian Life

You need to remember that as a Christian, you are not living under the fear of sin.

There is a difference between “living not to be sinning” and “living without sinning”.

The goal of the Christian life is to live not to be sinning.

My dear children, I write this to you so that you will not sin. But if anybody does sin, we have an advocate with the Father—Jesus Christ, the Righteous One. He is the atoning sacrifice for our sins, and not only for ours but also for the sins of the whole world – 1 John 2:1-2

Even when I sin after I made those agreements with God, as long as my conviction still remains “living not to be sinning”, I am still a Christian.

I just need to bring myself back to God.

The Once Saved Always Saved Fallacy

Perhaps, you are one of those folks thinking – “this guy just shot himself in the foot!”

“Does he mean nobody gets thrown out the door or don’t people walk out the door because of any sin in the future?” you ask yourself.

Well, I get you and understand your angle.

The truth is that God’s salvation can be misinterpreted because it does not rely on what we do. We are saved because God accepted Jesus. He now accepts us because we identify with Jesus

But if you deliberately keep sinning, you are already walking out the door and going to the dark side. Don’t take my word for it. Have a read of this,

If we deliberately keep on sinning after we have received the knowledge of the truth, no sacrifice for sins is left, but only a fearful expectation of judgment and of raging fire that will consume the enemies of God. Anyone who rejected the law of Moses died without mercy on the testimony of two or three witnesses. How much more severely do you think someone deserves to be punished who has trampled the Son of God underfoot, who has treated as an unholy thing the blood of the covenant that sanctified them, and who has insulted the Spirit of grace? For we know him who said, “It is mine to avenge; I will repay,” and again, “The Lord will judge his people.” It is a dreadful thing to fall into the hands of the living God Hebrews 10:26-31

Living not to be sinning is a clear sign of living by faith in the sacrifice of Jesus Christ.

Let us draw near to God with a sincere heart and with the full assurance that faith brings, having our hearts sprinkled to cleanse us from a guilty conscience and having our bodies washed with pure water. Let us hold unswervingly to the hope we profess, for he who promised is faithful. Hebrews 10:22-23

How To Know You Are Not Born-Again

It looks we have now come full circle.

I now understood why the colleagues of the guy in the opening story could say “he had walked out of his faith”.

He was no longer living out the confession he had made to God. It wasn’t because he had quit the leadership position.

He was no longer walking what he confessed – that the Jesus life is the role model life to live.

So, how do you know you are not born-again? Well, it’s clear someone saying a prayer over you doesn’t get you in.

The preacher’s salvation prayer and declaration of sins forgiven only works if you have made those three agreements with God.

By the way, all Christians actually have the power to make that declaration over anyone that makes those agreements with God. John 20:23.

If you stop living out the implication i.e. living not to be sinning but deliberately sinning, you are already out the door.

In the old lingo, you have backslidden. So, make a restart.

But it’s good to know that it’s not what I do that makes me accepted to God.

Thank you, God, for this assurance.