How To Cheat Work For Home Sake2 min read 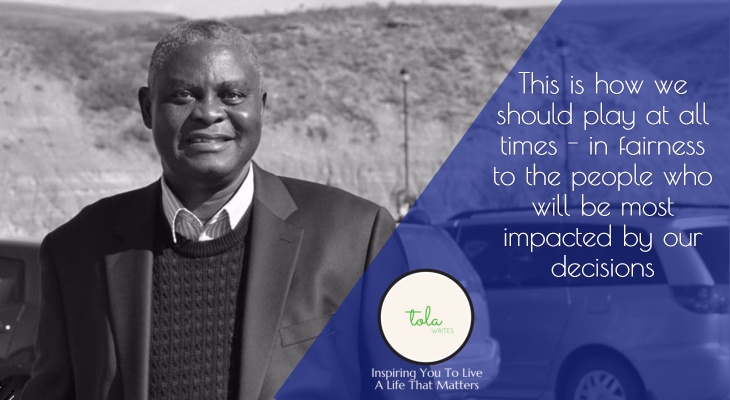 Recently, I listened to Mr. Olu Onakoya speak at an event.

If you haven’t heard of him, you are not alone, I hadn’t heard of him till that event. He was the first Nigerian Managing Director of Mobil Oil Nigeria Plc, an ExxonMobil affiliate company, from 2004-2008.

He chose to retire from the job and the company at the age of 57 – well before the required age of 60. The company had hoped they could keep him longer but he kept to his decision.

His reason for this was more personal than professional. In his words, he was missing out of the important times that his family needed.

At a point in his career, his daughters had to plan breakfast with him at Heathrow airport since the free time he had was a layover. They just could not get his time. He evaluated his life and made the decision to retire earlier

I saw integrity at play in the way he executed his retirement plan. He did not leave his company high and dry

But this is not just about him making the decision to retire. It’s about the quality of the way he executed it. There are 3 essential aspects to his decision

It’s funny that for a business that often relies on government patronage, as MD, he did not visit the seat of power until almost a year after he was appointed. He let other members of the team attend those government meetings.

2.Planned For A Successor

It wasn’t just about selecting the person but training him for the role. He had the successor brought in ahead of time to work with him as preparation for handover

Despite the fact that the family would be the biggest beneficiary from having more of his time, his wife expressed concerns about their financial security. That fear was assuaged when she saw that the investments he had made could sustain the current family lifestyle

I saw integrity at play in the way he executed his retirement plan. He did not leave his company high and dry but systematically prepared his team and successor for taking responsibility.

It’s no less than God would expect of us

How A Finance Guy Ends Up With An IT Certification