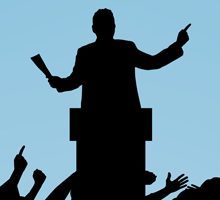 This post is a continuation from my last post which highlights what I think should be our worldview on Christianity & Politics. You can read my last post here.

Have you ever heard this before? “We must have Christians in government in order to protect Christian beliefs and guarantee a societal lifestyle that aligns with the Christian faith”. What do you think about this?

I think it is actually a limiting mindset for us to think like that. Here is why I think so. First, nobody has the power to protect Christian beliefs or the Christian faith. Despite so many empires that have ruled and disappeared, Christianity has remained.

Some of these empires really tried to stop the spread of Christianity with no success. It is clear that God is more concerned about the Christian faith than we think and it would take more than anything the human mind can imagine stopping its spread.

You know the funny thing; God does not need even a Christian in government to accomplish His will – The pagan King, Cyrus, was used to by issue the edict that gave the Israelites the right to return to Judea after years of Babylonian captivity.

Personally, I would like behavioural conformity because it would reduce the conflicts that I would face in daily living. I don’t have to suffer for doing what my faith asks of me. But the call I have is to take up my cross and follow Jesus.

Despite what many would say about the many benefits of Christianity on the society, it still remains counter-culture in so many ways. The value of what we offer really shows when we reflect what our counter-culture represents. But the problem is that so many of us spend too much time on what we are against rather than what we are for.

The message of the cross that we have is to create influence. We influence so we can transform. Unfortunately, we are letting ourselves get side-tracked by focusing on occupying political office in order to control behaviour. We are to focus on influencing for transformation.

I am not saying it is wrong for a Christian to seek political office. It is just wrong for a Christian to think that he needs to get it to protect the Christian lifestyle or faith. If you choose to seek political office, you are offering a similar service like a lawyer in his office would. We only expect you to live out your faith there. The only thing is that your decisions have consequence on a lot more people – no more, no less.

So if you have any intentions of going into politics, go into it because you want to use the platform to influence and serve more people to the glory of God. Aim to use your platform to present the message of the cross that would transform people. You don’t need to go there because you want to protect Christianity from being wiped out.

Don’t worry, God has been doing fine before you came on the scene and He will continue to do fine long after you are gone. That’s why He is God – HE FIGHTS FOR HIMSELF WHILE HIS PEOPLE LIVE FOR HIM.