What You Do When God Closes A Door5 min read 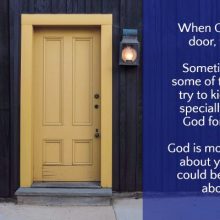 I don’t know if you remember the dying story of King Hezekiah in the bible. Actually, it’s more like the back-to-life tale.

According to the story, Hezekiah was seriously sick and it looked like it was time to cross the other side for him. Well, Isaiah the prophet came over to visit and told him that God had punched his card – it was closing time.

King Hezekiah, like any Christian, decided to ask for more time. Guess what? Isaiah came back to tell him that God was giving him fifteen more years to live.

He really must have been seriously sick because after he recovered guests came all the way from Babylon to check him out. He was so excited to have them that he decided to do a show-off party of everything he had – I think it was his way of impressing them.

They were probably impressed with what they saw that. And guess what? Isaiah told him afterward that all the stuff he used for show-off would eventually be owned by the Babylonians in the future – talk about long-term strategic positioning.

When God Closes A Door

I know you have probably been used to prayers asking God to open doors but what happens when God is the one closing the doors. Sometimes I think some of the doors we try to kick open are specially closed by God for our good.

Sometimes I think some of the doors we try to kick open are specially closed by God for our good.

Seeing Through The Hezekiah Story

Let’s go back to our Hezekiah story. So, he got fifteen more years to roll with. By the time he died, his son, Manasseh took over as king. Unfortunately, the apple fell far from the tree. Manasseh was so big and bad that he topped the any of the people living in Canaan before him (2 Kings 21:11)

So, what is the problem? Manasseh been bad had nothing to do with Hezekiah, right? Wrong answer. Manasseh was twelve years old when he became king. My guess is that Hezekiah did not want to die because he did not have a son to succeed him – the boy who would be king was born within the fifteen extra years he got.

Personally, I also think that is probably why Hezekiah was happy after Isaiah prophecy since it said that all the show-off stuff will be taken to Babylon with some of his direct descendants (2 Kings 20:18). It meant that he was going to have kids. 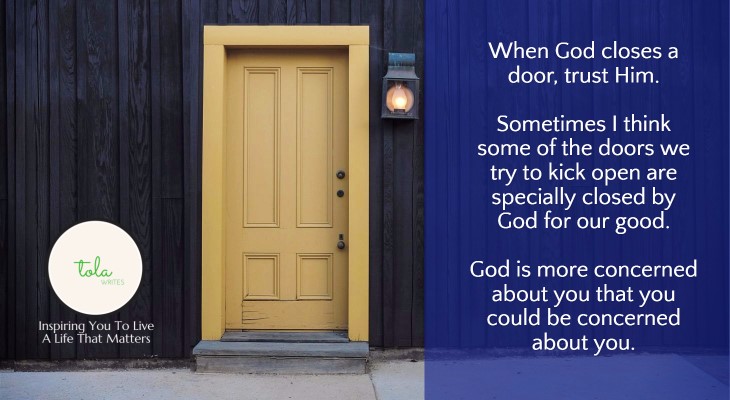 But perhaps, if he was willing to give up that personal fulfillment, Israel might not have had a king like Manasseh who shed so much innocent blood that he filled Jerusalem from end to end—besides the sin that he had caused Judah to commit (2 Kings 21:11). Oral Rabbinical tradition has it that he had Isaiah sawn into two.

Manasseh was such a shipwreck that God promised to punish the nation in a way that would shock anyone who heard it (2 Kings 21:12). All this started partly because Hezekiah would not leave a door that God wanted closed be.

I don’t intend to throw the kitchen-sink at Hezekiah. I actually hope we can relate to him and his request to God. It really sounds like something that all of us would try to negotiate with God if we had the opportunity. I hope you know that there is an Hezekiah in all of us – including me.

A Moses And A Hezekiah

In addition to Hezekiah, I believe that there is also a Moses in you. Wait before you start painting the picture of the Red Sea – I am going farther than that. The scene is at the waters of Meribah. Moses & Aaron didn’t do a good job and God told them that they would not go into Canaan because of that. (Num 20:12)

Despite Moses reputation for pleading with God on a few occasions, this is one occasion he did not. Why? He figured it was not a punishment but rather a blessing. How was it a blessing?

The Blessing Of A Closed Door

God was protecting Moses because he was now letting the complaints of the people become a source of frustration to him. Moses had been able to manage these complaints without leading to personal frustrations – until that point.

His frustrations were affecting his ability to serve God with a clear mind. And it showed in how he spoke about God and to the people. God decided to protect Moses from further frustrations if he led them into Canaan.

Anyway, he did go into the promised land – just not physically. Remember he and Elijah met with Jesus on the Mount of Transfiguration (Matt 17:3)

What You Do When God Closes A Door

If this looks too simple for you, it’s probably because we all try to complicate our lives most of the time.

God does interrupt our everyday lives. But until He does, let’s continue to live, doing the life the way we understand God at work in us to serve the people around us.

When God closes a door, trust Him.