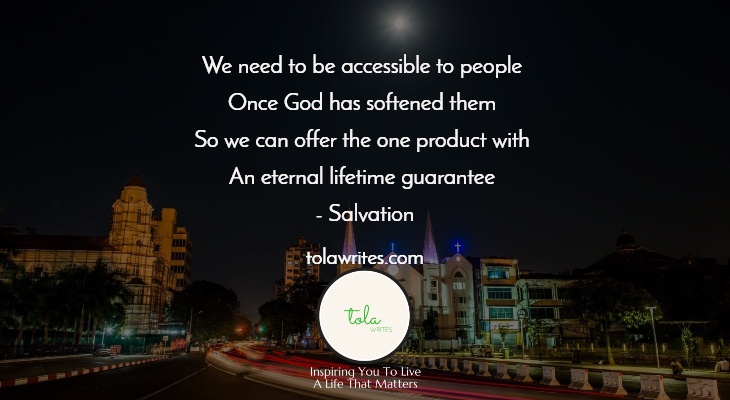 A while back, I wrote about a Christian convert originally from Iran. He converted to Christianity and his life has been dotted with the persecutions that come with such a decision.

I was talking with him recently and he shared the story of how he came to faith. Jesus had appeared to him in his dreams. In the first dream, He beckoned him to come. A few nights later, he had another dream where Jesus appeared to him. The dream ended with Jesus telling him that it was not yet time for him to die.

A few nights later, he had another dream where Jesus appeared to him. The dream ended with Jesus telling him that it was not yet time for him to die.

According to him, the second dream prompted him to get a bible to read and this would lead to his eventual conversion to Christianity. Despite all the hardship he has faced, he lives with a constant joy.

His experience reminded me once again of how God still intervenes in everyday life to draw people to himself. God never leaves people without the opportunity to find Him if they are really looking for Him.

In Acts 10:1-23, scripture writes the account of how God interrupted the everyday life of Cornelius, a Roman centurion.

Paraphrasing the message by the angel, God was saying “you are looking for me but what you are doing would not get you there. You need to listen to the message of salvation from someone who knows it – Simon Peter.”

Conversions In The Middle East…

Such similar intervention by God has been responsible for the gospel reaching the hearts of so many within the Middle East. In the book, DREAMS AND VISIONS paperback, ebook), author Tom Doyle writes about the rise in conversion to Christianity in the Middle East. A number of these converts trace the start of their conversion experience to dreams and visions of Jesus.

The book is a remarkable collection of stories from his 11-year service as a full-time missionary in the Middle East and Central Asia, spreading the word of Jesus Christ.  He currently serves as the Middle East director for e3 Partners, a global church planting ministry.

He was instructed to take a two-day journey down towards southern Nigeria where he would see men coming towards northern Nigeria and they will tell him the way of salvation. Two days later as he made the journey, he met missionaries coming towards the north.

They taught him Christianity and he went back home and converted all his followers. The cleric was the great grand-father late of Ishaya Audu, a former vice chancellor of Ahmadu Bello University who told the story.

…And God Works In Mysterious Ways Into Western Nigeria

History has the record of how Christianity in Nigeria made its first inroad through Abeokuta, Ogun state western Nigeria. But what people are not aware of why it was even given audience there. The amazing thing about Christianity in Abeokuta or “Egbaland” is that God told the people through the Ifa Oracle that they were going to have a visitation from the white man’s land and the white people would bring a book.

The Ifa Oracle told them that the progress of the land lies in the adherence to what the book says and the message of the white man. The book would turn out to the Bible and the white man was Henry Townsend

…Even Now, God Is Still At Work

All these stories convince me more that nothing can stop the spread of Christianity. Christianity will always continue to have converts – no matter the odds stacked against it.

God is so interested in people that He will find ways of disrupting their everyday routine so they can seek Him.

I am even more convinced of the great need for all of us to engage more with the people around us. This is because God has left the business of preaching to us. He may soften them up for us but we need to speak the words to close the deal for Him

How Christians Show Their Selfish side in National Crisis