When You Find It Hard To Forgive7 min read

Someone sent me a question recently. She had been struggling with forgiveness. She really wanted to let go but this was proving difficult. She was candid enough to let me know that she had read books and done an online class.
A part of me sort of felt intimidated – was I going to offer more than the better names she listed or would I add to the statistics.
But I reminded myself why I got into this gig.
I got into this gig because I wanted to share with my friends on the internet (that’s you) whatever I was learning living out my faith in work, love & life.
And that is what I wrote for her.
Now I’m sharing it with you
I hope you find some value in it
Before I talk about forgiveness, I’d like to talk about two important things that precede the need for forgiveness

This is the action that the other person(s) committed or failed to do. This could also include spoken or unspoken words and things which should have been done but were not done or vice versa

This is the emotional impact of the Act. It is the emotional impact that multiplies the Act
Part of the reason why the Act & the Hurts happen is because of an expectation mismatch.
You expect something and the person doesn’t meet that expectation. The gap is the act. It’s the beginning of the process.
So now that I have done all the theoretical sounding stuff, let’s get to the simpler stuff
Imagine you were playing football. You ready yourself to take a shot. Unfortunately, instead of hitting the ball, you bruise your toe on a rock.
You don’t need to be told what you just did because the pain sends shock waves all over your body and the cut on your toe tells the tale.
Let’s pause on the football metaphor – I’ll come back to it. 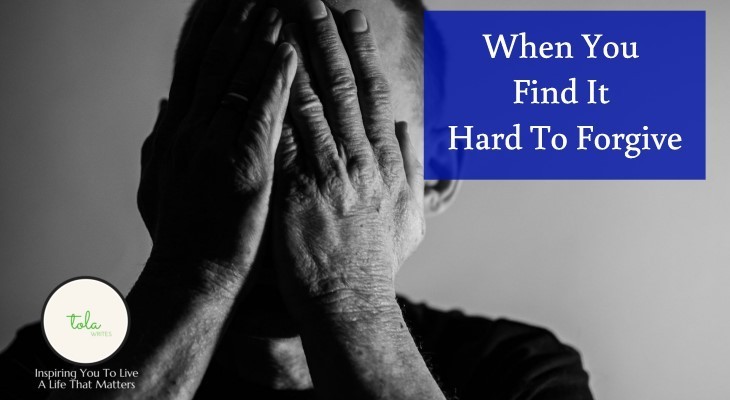 Forgiveness is first and foremost an act of the will. That means you choose to do it – it doesn’t happen like magic.
But what do you really forgive?
You forgive the Act before you forgive the person who committed the act.
So, the first decision you make is, “I forgive”
You make that act of will to forgive because that is what God expects of you. Here are some scripture references
Colossians 3:13 – Bear with each other and forgive one another if any of you has a grievance against someone. Forgive as the Lord forgave you.
Luke 17:3-4 – So watch yourselves.If your brother or sister sins against you, rebuke them; and if they repent, forgive them. Even if they sin against you seven times in a day and seven times come back to you saying ‘I repent,’ you must forgive them.
Ephesians 4:32 – Be kind and compassionate to one another, forgiving each other, just as in Christ God forgave you.
But after you forgive, the Hurt does not magically disappear. And this is where most of us get it wrong. We think because we feel the hurt, we have not forgiven the Act.
Back to the football metaphor.
After the injury to your toe, the first things you do is stop trying to play football and leave the pitch. But that does not stop the pain or the bleeding on your toe.
That is what making-the-decision to forgive does.
It takes you out of the place of further injury but it does not heal the injury.
To heal the injured toe, you need to clean, dress and treat it.
And this is what you need to do to the Hurt. You need to heal from it. This is the difficult part of living out forgiveness. It may take a short or long time depending on the depth of the hurt – same thing like the toe injury.
So, what can you do to heal the hurt – I am assuming that you have already made the “will” decision to forgive the Act
1 – Start with praying to God for healing: deep emotional healing is nothing short of a miracle. And God is still the only one that works those kinds of special miracles
2 – Realise that man at his best is man at his best: No matter how good any human gets, expect them to occasionally miss the mark.
3 – Pray for the person(s): This is really the clincher if you want to fully experience healing from the Hurt.
And the sort of prayer I am referring to is not the casual prayer you make under your breathe. It’s DEEP prayer to see transformation and progress in the other person.
Romans 12:14 – Bless those who persecute you; bless and do not curse.
I am saying this from personal experience – this is the act that really brings healing to your heart.
You will notice that I haven’t said anything about going to talk the matter over with the person that did the Act which caused the Hurt.
That is reconciliation. And the truth is that sometimes when we seek reconciliation before giving forgiveness and healing from the hurt, we are not putting God’s interest ahead of our own interests.
God’s intention at all times is that He will be the source of emotional healing – He can use people to trigger the need but he must be the source.
This means that our healing from the Hurt should not depend on reconciliation.
It is sort of the mistake the Israelites made in Jer 2:13 – My people have committed two sins: They have forsaken me, the spring of living water, and have dug their own cisterns, broken cisterns that cannot hold water
The thirst they had was meant to drive them closer to God but instead, they went to cisterns without water.
Reconciliation usually gives us a “feel-good” sense and that’s why we think reconciliation is important for forgiveness & healing to be complete. Forgiveness & healing opens the door for reconciliation but reconciliation should not be the gateway for them.

Let me use another example.
God has already provided forgiveness for us through the death & resurrection of Jesus. He also dealt with the Hurt from humanity sinning by having Jesus die a gruesome death – the ugliness of sin has already been shown by the nature of Jesus’ death.
When we turn God, He is not starting the process of forgiveness all over again. Rather, He is reconciling us to Himself (All this is from God, who reconciled us to himself through Christ and gave us the ministry of reconciliation- 2 Corinthians 5:18).
If we choose not to accept His forgiveness, it is our loss. We miss the opportunity to receive forgiveness and be reconciled to God.
So how did God go through the forgiveness process?
1 – He made the decision to forgive – Ephesians 4:32b, Forgive each other, just as God in Christ also has forgiven you.
2 – He looked to Himself to heal the Hurt that our sin had caused – Isaiah 59:16 – He saw that there was no one, he was appalled that there was no one to intervene; so his own arm achieved salvation for him, and his own righteousness sustained him.
3 – He knows that we bungle things up: Psalm 103:14 – for he knows how we are formed, he remembers that we are dust
4 – He prayed for the best for us before we choose to be forgiven – Ephesians 1:4-5 – For he chose us in him before the creation of the world to be holy and blameless in his sight. In love He predestined us for adoption to sonship through Jesus Christ, in accordance with his pleasure and will

And I am not writing fluff – this is really my experience
A couple of months back, someone did something that really hurt me. I really considered calling the person up and talk it up.
Initially, I thought I’d wait a bit before doing that – let the emotions go down.
Guess what? The hurt did not go down because of time. Eventually, God called my attention to praying for the person. I did that for about a week before I realized, I didn’t feel the hurt I used to feel.
I eventually did not have the talk – it was not necessary.
Looking back, the talk was more because I wanted to “get it off my chest” and not really about healing.
It’s from that experience of God’s work that I write.
I really hope it helps you.
Let me know if you have any questions
Like It? Share It