When Parents Do Their Jobs6 min read

I am typically behind on social media so I only hear about the latest news when someone puts it up on one of the WhatsApp groups I belong to.

This week someone posted that one of the daughters of Yemi Osinbajo, Nigeria’s vice president & pastor in the Redeemed Christian church of God. Actually, that was not the big story. The big story was when someone claimed that the guy she was engaged to is a Muslim.

Well, the whole matter was put to rest the next day when someone posted this information from a news organization – “Our source also confirmed that Oluseun Bakare is a Christian and a worker in the Redeemed Christian Church of God.”

So, what was the whole hullabaloo about?

Growing up in the culture I came from, parents are made to understand that you never retire from the job till you say goodbye to mother earth.

This is why people will still “tell your daddy” if you make a wrong move even as a grand-papa!

Everyone believes that your daddy or mummy can call you to order – that is the fine print.

So, you can probably imagine why people can “blame” the choice of a spouse on a parent. if only the parent did his or her job well, she would choose “the right” spouse.

Button line, the unspoken goal of parenting seems to be to raise children that conform to society’s perception of “great kids”

Raising Great Kids Is A Responsibility

I’d like to suggest that the parent’s responsibilities are broken into three:

1. Ensure the kids are safe in the present

Providing safety and a sense of safety are two different things. The first is physical while the second is emotional. Parents need to provide both.

As kids grow older, the parents’ responsibility for providing safety diminishes and the children begin to assume some of that. But parents never drop out of providing a sense of safety to their kids

2. Empower them to achieve future success

This is probably one of the most difficult parts of the job. It’s more than just choosing the right school to attend or neighborhood to raise them in. You are doing stuff for them

Going to the right schools or growing in the proper neighborhood would mean little if they can’t independently make great choices in life.

That is the most important goal of all these preparations.

This is the fun part that we all love as parents. But it’s the third and least important on the list. You only get to enjoy doing this once you have done the other two.

I bet I don’t think I need to tell you how to make them happy as kids – your kids will probably give you all the ideas you need.

Raising Great Kids Is A Gift

You know something, no matter how well you perform your responsibilities, there are no guarantees to having a “great kid” outcome.

Having a great kid is also a gift that your kid offers you.

Sometimes you do all you can, see your mistakes all along the way and still out pops a great kid or better put a responsible adult.

And you wonder, how did I do that?

Take the time to thank your kid. Always appreciate that a responsible adult is a combination of good parenting and a responsible kid.

Don’t hype your efforts so much that you forget the input of your kid.

You can do all the right things; your kid decides not to care about them and takes the highway.

A Lesson from Eli & Samuel

Most of us know the story of Eli and parenting. He had two kids Hophni and Phinehas who were no good.

God blames the outcome of the two boys to not only irresponsible kids but bad parenting.

God even sent an appraisal memo to Eli which should have made him improve his performance. Eli probably figured that his parenting job was over since the boys were big and married.

Samuel, like his boss Eli, didn’t fare too well on the kids’ department. His two boys Joel and Abijah who he appointed as judges were taking tips on the side to change the outcome of cases – is that called lobbying or bribery?

But what I noticed is that God did not blame Samuel for bad parenting. Even the people seemed to think that the problem was not bad parenting but irresponsible kids. 1 Sam 8:5

Don’t judge a book by its cover 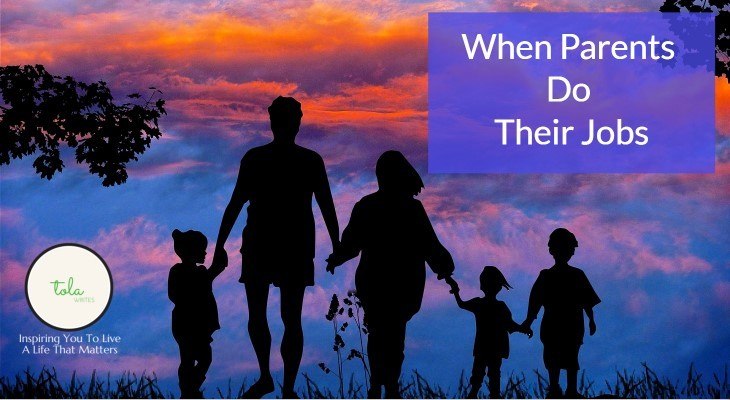 Christian Parenting in All This

If you are like most folks, you wonder if kids walking out of the Christian faith is the fault of the parent or the kids.

The most important thing to remember is that parents don’t make the decision for their kids.

Parents can only do their best and pray that their kids respond to God rightly after seeing good examples through their lives.

By the way, even God, despite doing all the right things, doesn’t see all His creation come to Him. Some even choose to say He doesn’t exist.

And it doesn’t get better with His kids either.

There are times you see some Christians and wonder “are THESE God’s kids?”. And yes, they are God’s kids.

If God doesn’t have it right with all His kids, why do we place such a weight of expectation on ourselves?

We can only be the best parents that we can be, trust in their ability to be responsible and pray to God for them to turn out as great adults.