When God Doesn’t Say Yes To Your Plans6 min read 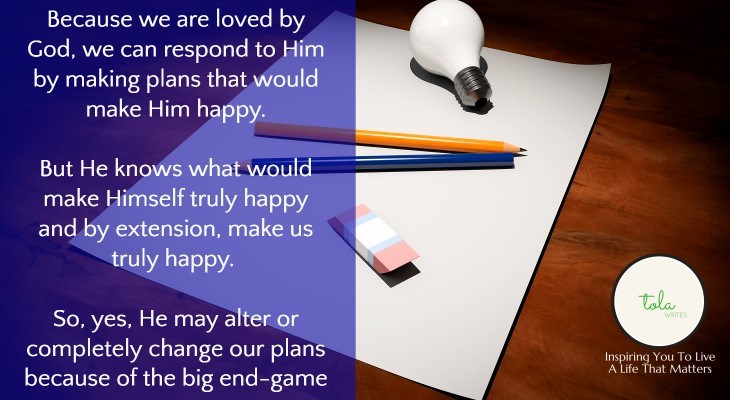 I don’t know if you remember this story from Luke’s account of Paul’s missionary work.

Paul had come up with an evangelistic strategy and had pinpointed the new areas he wanted to get in. But as it would turn out, God had other plans.

First, God would not allow Paul to go into Asia. “Ok, off to plan B, let’s get into Bithynia” Paul must have thought. The problem here – God still would not let him go. At this time, Paul gets the memo. “No need to move to new territories. I might as well take my time and wait for new instructions”. So, off they went down to Troas. It was while he was here that he would “perceive” that God said it was time for Macedonia to hear the gospel. Acts 16:6-10

The funny thing is that Paul never really heard God say “Go to Macedonia”, he just came to that conclusion from something he saw while he slept.

When God Doesn’t Say Yes To Your Plans

I make plans – good plans by the way and I think God ought to be happy with them. But for some strange reason, He seems to take a completely different view about how my life should run.

After all the lost time, I still never get a reason why those plans were never good plans from God. Bottom-line, it seems like God has a different playbook that I can’t really understand.

I wonder if you have been on that boat. What thoughts ran through your mind? Did you think God was picking on you?

Sometimes, it gets confusing when you now read testimonies from people who say – “I planned so-and-so and God stamped it by letting it turn out just the way I planned it”

A part of you begins to think that perhaps you might be the step-child in God’s family. God probably only says “yes” to you after He is tired of your long whining called prayers.

When things don’t go the way we plan and we ask questions, we are really not asking questions about ourselves. We are really asking this question “God are you good?”

There is nothing wrong asking this question. The problem is what happens after we ask it and the conclusions we arrive at.

Part of the problem we have about who God is comes from how important we think we are in God’s universe.

This means we play a part of His script for the universe but a part He marks out.

A part of you begins to think that perhaps you might be the step-child in God’s family. God probably only says “yes” to you after He is tired of your long whining called prayers.

Are You Ready For A Great Life?

So, does this mean I should not make any plans since God holds the remote control of the universe – including me? Should I just sit back and just watch the show?

I think this is where being loved by Him changes everything. Because we are loved by Him, we can respond to Him by making plans that would make Him happy.

But He knows what would make Himself truly happy and by extension, make us truly happy. So, yes, He may alter or completely change our plans because of the big end-game.

The big end-game is really something to look forward to. It is the guarantee of a great life. A great life means you have lived to be truly happy because you lived every day to make God truly happy.

Short-term frustrations now come with a huge payoff because of the big end-game. It’s like nothing you have never seem. A high-stakes game where you don’t cash-out your chips in quick wins.

Part of the problem we have about who God is comes from how important we think we are in God’s universe.

We never read that Paul eventually found out the reason why God did not like his plans for “taking over” Asia or Bithynia.

Come to think of it. Going to Macedonia was really plan D. Plan C was to go and just hang out in Troas. Plan D was a conclusion that Paul made and since he did not see God holding out on it, he figured it was a plan he (Paul) should follow.

In honesty, we may not always know what plans God stamps when we are making them. But some signs of an unstamped plan include:

1.An inability to perform in an area we normally perform

Luke writes that Paul was kept from preaching in Asia by the Holy Spirit. The Amplified Bible put it in very strong terms “Now they passed through the territory of Phygia and Galatia, after being forbidden by the Holy Spirit to speak the word in the west coast province of Asia Minor.” Acts 16:6 (AMP)

2.A lack of inner peace when it comes to executing the plan

Concerning Bithynia, Luke writes that the Holy Spirit would not allow Paul from entering the place. “When they came to the border of Mysia, they tried to enter Bithynia, but the Spirit of Jesus would not allow them to” Acts 16:7

I learnt a thing or two from Paul here:

1- Make plans not just any plans BIG PLANS when you can.

Don’t hang back and say you will not make any plans. Make plans and BIG PLANS when you can.

You are loved by the God of the universe and you are important in His master plan. So, make plans worthy of Him – BIG PLANS.

But to Him, plans are not big because of the scale of execution. They are big because they challenge you to offer all you have to Him.

Make plans that challenge you to give all you have to make Him happy.

And make every effort to live out your big plans. Only stop if you think He is not in on it.

There is a big end-game to look forward to