There are a few things that get the blood pumping like talking politics.

The only other adrenaline pumping talk that matches talking politics is talking sports. Football, tennis, basketball, choose your pick. They turn one-time friends into strong rivals and create common ground between strangers.
That is a conversation for another day.
Recently, a pastor posted that any fellow pastor supporting a particular candidate is a murderer.  Very strong words. Especially if you consider that no murderer has a place in the kingdom of God

So, is it possible for Christians to talk politics, support different candidates or ideologies and still get along?

What Does Politics Have To Do With Us

For a long time, the Christian fold has been divided into two camps – avoid politics and engage politics.
The Avoid camp see their approach as a way to protect ourselves from the gray lines that come with playing in politics. If you must do politics, you must be ready to be strange bedfellows with people who don’t share all your personal convictions for a greater good.
Hanging around these individuals is seen as a stain which should be avoided at all times and at all costs.
The Engage camp see their approach as a way to shine the Christian light to every situation – including politics. God has given Christians wisdom to live life right. Why don’t we use that wisdom to create a better society?
We already engage people with differing opinions in everyday life. Why don’t we take the challenge to somewhere where it really counts?
So what is the right position?

In politics but not doing politics

My view of politics is sort of a middle ground
You need to avoid politics if you can’t stand the heat and stay in it if you can stand the heat.
Politics is like any activity in life – it requires a sense of commitment. If you can give that commitment to it without losing yourself, then go for it.
But don’t let the fear of losing keep you from engaging or getting involved in it.
Politics is one of the ways we make a difference in life. If you think it’s your platform to make a difference, then you might have the energy for it

Everybody Dancing To The Sound Of Politics

We will all engage politics but we will not all get involved in politics.
Asking everyone to get involved in politics is a tall order.
It’s the same mistake we made when we started talking about missions. The first talk used to be “everyone goes on missions”
Later on, we got smart and realized that we can be senders(with finance & prayers), goers or home tillers. None is better, we are different.
Or take the example of business. There was a time the talk was that everyone should go out and be entrepreneurs.
But not everyone can start and run a business – some can only work in one.
The dialogue keeps on changing because of the importance of these areas. These areas are the ways we influence the society and culture. Here is the full list:
1) Education
2) Religion
3) Family
4) Business
5) Government/Military/Politics
6) Arts/Entertainment
7) Media
We need to always remember that all these areas influence the society.
On a personal level, we need to choose where we can use our God-given abilities to create change.
We may not get involved in all of them but we probably engage with all of them.

To Engage Or To Get Involved

I hear a new narrative about politics. Everyone must become card-carrying members of a political party.
It’s a variant of the old slogans – everybody does missions or everyone does entrepreneurship
I think there are two narratives on how we should do politics which should be carried with equal fervor:
1 – Engage in politics by voting so you can influence the outcome: or
2 – Get involved in politics by joining a political party if you have the heart, the passion and can stand the heat. You will start influencing the process.
There is no need to guilt people saying that they must all join a party to influence in politics 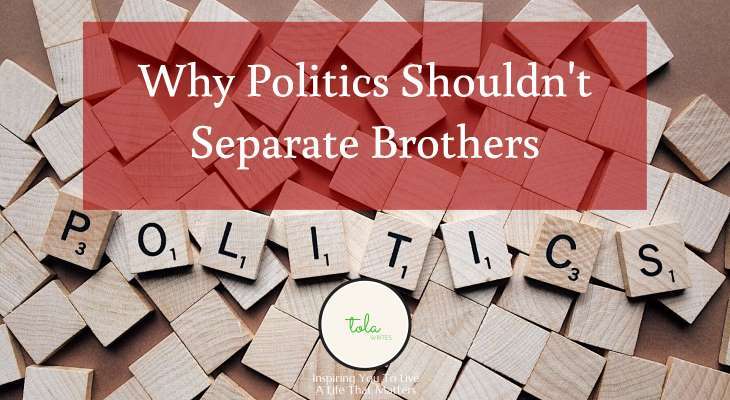 This is probably where the argument volumes go up a notch
Like the pastor at the beginning of the post, we think we know the best people for the job.
And can’t understand why others don’t.
There are no perfect individuals and that means we don’t see perfectly
But almost every human government has good in it. It is the goodness in any government that allows it to last beyond one day. A completely bad government will not last beyond one day.
Because we see differently, we thus chose to focus on whatever aligns with our worldview
We make most of our decisions based on sentiments and then look for “good reasons” in the government or candidate to justify our decisions.
There is nothing wrong with this. It’s part of being human.
Christians are still humans so we still make decisions emotionally.

Where Is The Good In Government?

Government exists for two reasons- the good of God and the good of the people.
The good of the people is usually easier to explain. The Government or candidate has the character and competence to use the common resources to create the most good for the most number of people in the society.
But our perception of most good is different for all us. So we may not always agree on the same candidate or view about government performance.
The good of God is the most difficult to understand. This is because we see short-term but God sees long-term.
Because God sees long term, He sets up government or candidates that might not have the best capabilities to run things.
No candidate wins an election without God even if the candidate does not believe in God. God has more vested interest in politics of countries than the citizens do so He influences the outcome every time. God influences election outcomes for His own good every time.

Unfortunately, sometimes the good of God may seem contrary to the simple view of the good of the people
The good of the people means that government must always guarantee prosperity and progress – things we all love
But occasionally, God’s good may not mean prosperity or progress.
An example might help out
God set up the Babylonians to rule and enslave peoples. The Babylonians were not the nicest of invading armies. They were ruthless conquerors (Hab 1:6).
Israel did not escape their invasion – and they did it in phases. During phase 1, they took a couple of the Israelites as captives into Babylon.
While in Babylon, some prophets started telling the captives promises in the name of God. They came with stories that wiped out the bad government of Nebuchadnezzar king of Babylon (Jer 29:8)
Well, God had Jeremiah write to the captives that He was not taking out Babylon yet – they would live as captives for 70 years under Babylonian rule (Jer 29:10).
God’s good was that the ruthless rule of the Babylonians would continue for another 70 years. It obviously did not align with the Israelites perspective of their good

Unless, we can claim to always know God’s good at all times, the simplest reason to support a government or candidate should be our sense of how much good they create or can create.
This means we cannot all agree on the same conclusions every time. And that is OK.
It is OK to see things differently and still remain brothers.
It is always important to remember that no government or political candidate can guarantee the establishment of God’s rule on the face of the earth.
God does that all the time. We can not take up God’s role to try and guarantee that all the time.
God is more concerned about God’s good than any human could be.
As humans, we can only act based on how we think God’s interest is served best for the benefit of the society. God does not demand more than that from us.
There is no need to make enemies of each other because we see things differently.
Next time you can’t agree on the same candidate with your Christian brothers – it’s OK.
No matter whoever wins – GOD wins all the time.
Like It? Share It