How Christians Show Their Selfish side in National Crisis7 min read

In one of the groups I’m in, I got a video of Christians who defied the new culture of social distancing. They were still meeting for service.

Reporters were trying to speak with some of the congregation as they drove out. They were not keen on giving them the time of day.

Anyway, a reporter got a question in and tried to find out if they were not concerned about the Coronavirus

By this singular mindset, we forget what we are here to do.

But how did we become so selfish?

When God Separated a Nation

Before you go all gung-ho with me about the covenant we have through Jesus and all that, let me establish a few things

I agree that God has promised to keep His people safe in every situation. The immunity covers everything. But this is as long as the outcome favors the overarching metanarrative He is writing

In Egypt, God drew the line after the third plague. He wanted to show the utter powerlessness of Pharaoh to protect his people – the Egyptians. As with most cultures, Pharaohs in Egypt had godship rights. They were sons of Ra – Amon-Ra. And as gods, they could save their people

This was one of the reasons why the plagues infuriated Pharaoh. They showed his inability to stop God.

The distinction of Goshen from the rest of Egypt was God’s battleground with Pharaoh. It had more to do with God-vs-pharaoh than it had to do with the people of Israel

“ ‘But on that day I will deal differently with the land of Goshen, where my people live; no swarms of flies will be there, so that you will know that I, the Lord , am in this land. I will make a distinction between my people and your people. This sign will occur tomorrow.’ ” Exodus 8:22-23 NIV 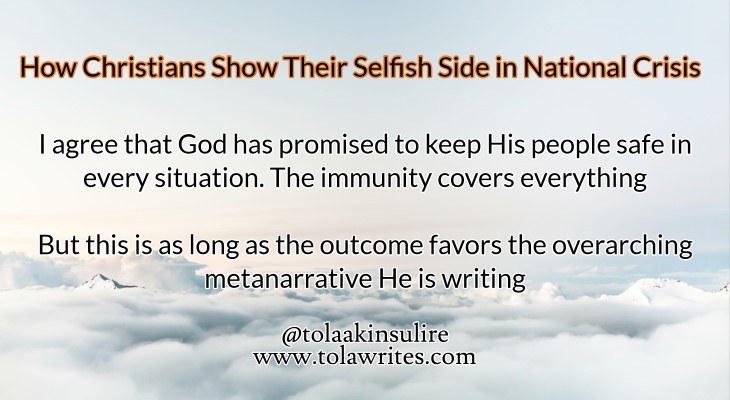 When God Brought Egypt’s gods to their knees

God did not pick the plagues at random. They were a systematic attempt to show His supremacy over the gods of Egypt.

God went through the whole Egyptian gods’ community and gave them all a bashing. He saved the last blow for the biggest boss in town

– Turning the Nile to blood (powerlessness of the Egyptian river deities, such as Hapi, the god of the Nile),

– The frogs (God’s power over the Egyptian goddess of childbirth and fertility, Heket, who was depicted as a frog or a woman with a frog’s head),

– The insects (God could control insects, whereas the Egyptian insect gods, such as Sepa and Khepri, offered no protection),

– The death of cattle (mocked the Egyptian cattle gods, such as Hathor, the highly regarded cow goddess, and Apis, the much-celebrated bull god),

– The boils (an attack on Sekhmet, the Egyptian goddess of physicians and healers),

– The hail (God’s power greater than the gods of thunder, rain, and storms such as Min and Set),

– The locusts (which came on the lengthy and powerful east wind were an affront to the goddess Isis, who supposedly provided favorable winds for sailors),

– The death of first born (rendered the Egyptian deity Isis as ineffective. Isis was a patron goddess of childbirth and motherhood, and was one of the oldest goddesses of ancient Egypt. As earlier mentioned, Pharaohs are regarded as sons of Ra, the supreme state god. The death of the prince was to show the helplessness of Ra)

Back to the Selfish Christians

Unfortunately, we have taken this Goshen experience out of context. We have defined a universal theology for all times and all places out of it

As a result, we gather amongst and keep to ourselves during times of national tragedies

God’s ultimate goal for His people in the nations He has planted is that through us, our nations will receive mercy and be blessed. Let’s take a read from Jeremiah and how he advised the exiles of Israel in Babylon

“Also, seek the peace and prosperity of the city to which I have carried you into exile. Pray to the Lord for it, because if it prospers, you too will prosper.” Jeremiah 29:7 NIV

During times of national crisis, God expects us to diffuse our salt into the people so that we can preserve our countries

We do that better when we go into the people instead of looking for a soapbox to stand on. 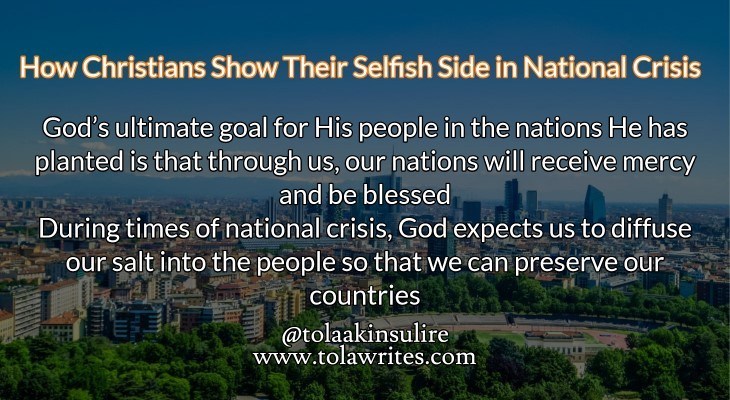 When we Forgot the Main Thing

Some of the things we have forgotten include:

1-The Priesthood of believers: the church becomes the collective believers working and doing ministry in every sphere of life.

2-The Equipping of believers: the fivefold (or fourfold depending on what you think) offices (apostles, prophets, evangelists, pastors & teachers) become “preparers” of the church for doing ministry and acting during times of crisis.

And that is why we expect them to do everything that the church is meant to represent while the rest of us seat back, relax and sip coconut juice

The spoken question that most of us are asking them is – “what are they doing with all the “equipping” we provided all these while?” 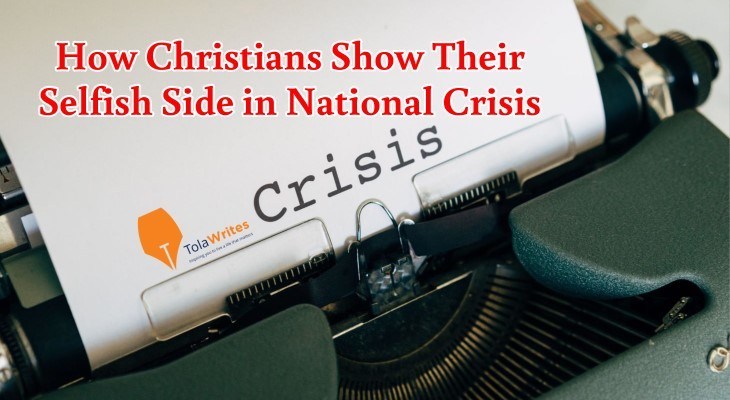 There was Once a National Crisis

As you can imagine, times of national crisis is not peculiar to any generation

Towards the end of the second plague, Bishop Dionysius of Alexandria wrote to the church praising them for what they had been doing.

He writes “Most of our brothers showed unbounded love and loyalty, never sparing themselves and thinking only of one another. Heedless of danger, they took charge of the sick, attending to their every need and ministering to them in Christ, and with them departed this life serenely happy.”*

About two centuries later, these actions became the basis of what the Roman Emperor Julian in his letter to the Roman high priest of Galatia said made Christianity a growing threat.

Let me quote from his letter “Atheism [i.e., Christian faith] has been specially advanced through the loving service rendered to strangers, and through their care for the burial of the dead. It is a scandal that there is not a single Jew who is a beggar, and that the godless Galileans [i.e., Christians] care not only for their own poor but for ours as well; while those who belong to us look in vain for the help that we should render them“*

During times of national crisis, we are called to extend our spiritual cover to our communities, serving them physically, financially and spiritually 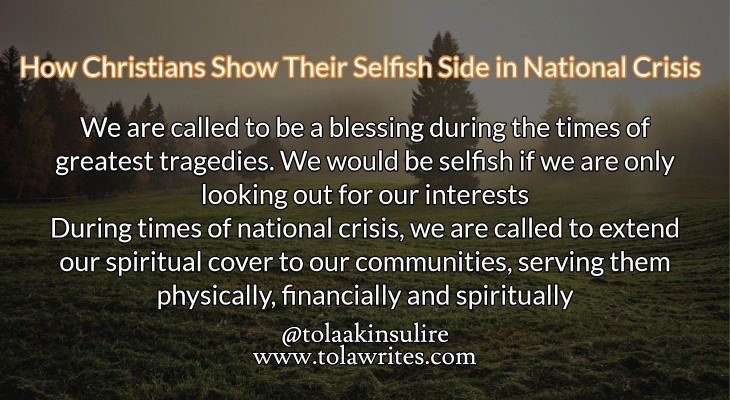 How Christians Show Their Unselfish side in National Crisis

Let me lay it on you

“I will bless those who bless you, and whoever curses you I will curse; and all peoples on earth will be blessed through you.” Genesis 12:3 NIV

We are called to be a blessing during the times of greatest tragedies. We would be selfish if we are only looking out for our interests

This could be our finest our of ministry as a church

How We Respond When Corona and Others Strike

How To Live With People You Don’t Trust