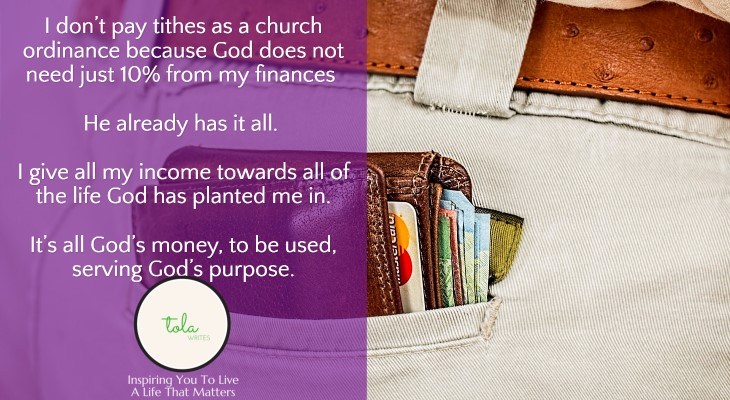 I grew up in an Anglican Church (Episcopal for my Yankee buddies) and for some strange reason, it was not really a big subject when I was growing up. The big subject in my church was how many times we were called to come up and drop an offering.

Well, most of us found a way around that, we broke our twenty-naira note into four five-naira notes. Problem solved. I make the priest happy by dropping an offering for every call and I make myself happy by not giving more than I planned to give.

Anyway, as times moved on, tithe became a big issue. You had to give your tithes or you are toast in God’s book.

It’s almost like God operates a protection racket. Your tithe is the money you pay the heavenly mafia for protection against the devilish street gangs. Stop your tithe – lose your protection.

I tried to look through the bible to see if the church practiced tithing and I really couldn’t find anything like that in Acts or the Epistles. So how did it become a church practice?

Don’t get me wrong, I saw it in the bible but I only say it practiced in Judaism and not in Christianity.

And don’t get me started on the “Abraham gave a tithe to Melchizedek before Judaism started” point.

You see Abraham only gave tithe once in his life to him so if we follow that logic, it means you should only give it once in a lifetime. Right?

But that is really not my point.

So how did we get to tithing?

It’s almost like God operates a protection racket. Your tithe is the money you pay the heavenly mafia for protection against the devilish street gangs. Stop your tithe – lose your protection

In the beginning, church leaders were supported by the generous contributions from other believers they served and not with tithes (Gal 6:6).

Cyprian’s proposal was very rare for his time. And it was ignored by most Christians until much later.

It was not until the fourth century, 300 years after Christ, that some Christian leaders began to push for tithing as a Christian practice to support the clergy.

But it did not become widespread among Christians until the eighth century! According to one scholar, “For the first seven hundred years, they [tithes] are hardly ever mentioned. ”

And that is how we got to where we are.

I’ll skip the part of the journey where tithe became required by law in many areas of Western Europe and how the distinction of the tithe as a rent-charge and a moral requirement supported by the Old Testament faded – no need to bore you with that piece of history.

If it’s clear that tithing was not a practice of the early church why do we do it?

I can only find two reasons

1.We got lazy: Unless we have a compelling reason to do anything, we obviously won’t do it. Most of us will obviously not give anything to the church unless someone holds a mallet to the back of our head. Mal 3:8-11 is the nice mallet for the job. It guarantees protection and multiplication.

2.Making the job easier: Look it’s a lot easier to plan under certainty than uncertainty. Tithing makes church financial planning a lot easier. When you have a guaranteed amount that comes in every month, you can plan programs, events and staff salaries around that.

The premise of giving tithe as a means to securing heaven’s protection or experiencing some new level of blessing is a very flawed premise.

In the Old Testament, you do this-and-this to be blessed. In the New Testament, by coming to Christ, you are already blessed – Praise be to the God and Father of our Lord Jesus Christ, who has blessed us in the heavenly realms with every spiritual blessing in Christ – Eph 1:3

All you need to do access your blessing is this – Ask in Jesus Name (John 16:24). No need to give to be blessed. You are already blessed.

Why Should We Give

We give from the overflow of a grateful heart for all we have received from God – all the blessing which is already ours. We are not giving to get brownie points with God

This is the reason why tithing was never mentioned among the church. When giving was mentioned in the early church, it was an appeal to the disciples’ heart of generosity.

Hence, there was no need to scare them into giving. Because we have been blessed, anytime we give, God rewards the heart of generosity He sees in us. But how He rewards is up to him.

God can choose to reward you with more material fruits so that you can spread it around because of your generous heart.

And He may reward you with non-material fruits. Or it might come on the other side of heaven.

We don’t have control over how we will be rewarded.

We give from the overflow of a grateful heart for all we have received from God – all the blessing which is already ours. We are not giving to get brownie points with God

Another Reason To Give

In case you have forgotten, through Christ, God now owns all of you and that includes everything you own.

This means God has first dibs over everything you have. This is why tithes do not apply to New Testament Christianity.

The rule of the tithe is this – I give God 10% so He can let me enjoy the 90% in peace. The rule of New Testament Christianity is that you have to give God all since He owns you and all you have.

Because God owns all you have, He expects you to give to everything that is important to Him. This is not limited to your church – it spreads to every relationship He has planted you in.

When giving was mentioned in the early church, it was an appeal to the disciples’ heart of generosity. Hence, there was no need to scare them into giving. Because we have been blessed, anytime we give, God rewards the heart of generosity He sees in us. But how He rewards is up to him.

Where To Give To

New Testament Christianity is a call to live a life that celebrates the things important to God.

Our use of finances is no exception. God has not placed a burden of how much to give – this should come from an overflowing heart. But He has set out where we should use our finances:

Take care of our family – Anyone who does not provide for their relatives, especially for their own household, has denied the faith and is worse than an unbeliever (1 Tim 5:8)

Take care of our Church Family – Now about the collection for the Lord’s people…(1 Cor 16:1-2)

Take care of our local community – Therefore, as we have opportunity, let us do good to all people, especially to those who belong to the family of believers (Gal 6:10)

God has not placed a burden of how much to give – this should come from an overflowing heart.

Unless you plan how you should give, you will never give as much as you should be giving.

I practice this habit. This has made it easier for me to live a generous heart while also ensuring that God has first dibs on my finances.

After a bit of learning here and there, I came up with this model for allocating my finance – GIVE, INVEST & LIVE in that order.

GIVE: I start with a plan on giving to support my church, social causes, extended family, and community.

INVEST: I now need to increase my ability to continue to create future financial value. I invest in assets and in my learning. I don’t invest because of a fear of the future. I invest because I have a calling to be profitable in what God has given me.

LIVE: I now provide for the “here and now” – every expense that I spend on to live life with my family and me.

Why I don’t Pay Tithes

I don’t pay tithes as a church ordinance because God does not need just 10% from my finances – He already has it all. I give all my income towards all of the life God has planted me in.

I use my finances to take care of my family because God has given them to me as a trust. A trust I must account for. They have a God-given right over my finances.

I use my finances to support my church community because they are precious to God. Jesus died to make them His own – they deserve everything I can give to support them. It’s not a favor. It’s a duty.

I use my finances to serve my community because God has planted me among them to be a light. I shine the light by investing my God-given resources on them.

The rule of the tithe is this – I give God 10% so He can let me enjoy the 90% in peace. The rule of New Testament Christianity is that you have to give God all since He owns you and all you have

God is not looking for a 10% contribution from me. It’s an insult to reduce Him to this.

This is why I try every day to make sure I spend every finance I get, which is already His, in a way that reflects how He would want it spent.

It’s all God’s money, to be used, serving God’s purpose.

*I owe the history stuff to Frank Viola’s book Pagan Christianity: The Origins of Our Modern Church